The Government Accountability Office (GAO) recently issued its annual bid protest report. As discussed below, this year’s report is noteworthy for multiple reasons, including that it shows that protesters received some form of relief from the procuring agency in more than half of the protests filed with the GAO in fiscal year (FY) 2022. The report is also noteworthy because it indicates that bid protest filings at the GAO were down by 12% in FY 2022 — a trend that appears to be attributable in part to an increasing willingness of protesting companies to file at the U.S. Court of Federal Claims in the first instance and also potentially because of the Department of Defense’s enhanced debriefing procedures.

What are the highlights of the 2022 report?

The Competition in Contracting Act of 1984 (CICA), 31 U.S.C. § 3554(e)(2), requires the comptroller general to report to Congress annually on a number of issues. The GAO takes that opportunity to include in the report “data concerning [its] overall protest filings for the fiscal year.”

Most notably, protesters received some relief in 51% of the protests that were filed at the GAO in FY 2022. The GAO reports this statistic as an “effectiveness rate” — i.e., the percentage of protests where the protester obtained “some form of relief from the agency . . . either as a result of voluntary agency corrective action or [the GAO] sustaining the protest.” As the following chart from the GAO’s report shows, protesters received some form of relief from the agency in more than half of the protests filed with the GAO in FY 2022: 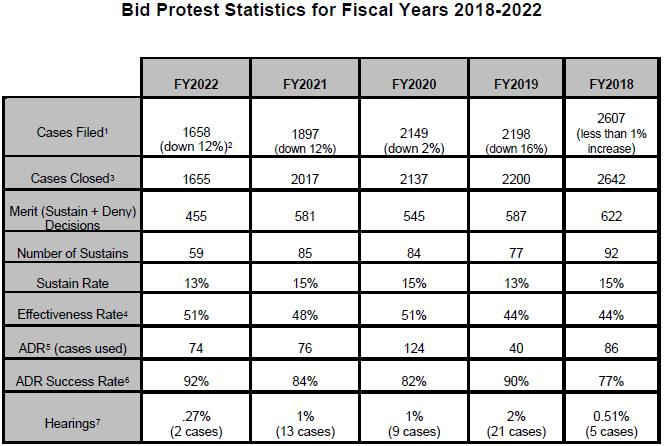 This marks the third year in a row that the effectiveness rate has been at approximately 50%. In other words, in roughly half of all cases where a protest is filed — a virtual coin toss — the procuring agency either decides that some sort of corrective action is necessary — often a re-evaluation — or else the GAO sees merit in the protest.

Second, for the fourth year in a row, the total number of bid protest cases filed at the GAO has declined from a high of 2,607 cases filed in FY 2018. In FY 2022, the number was 1,658, which is a 12% decrease from the number of cases filed at the GAO in FY 2021, and which is a figure less than two-thirds the number filed in FY 2018. Anecdotal evidence suggests that one main factor driving the decrease in filings could be that protesting companies are increasingly willing to file bid protests at the U.S. Court of Federal Claims in the first instance — a trend that we expect to continue in the coming years. Another potential explanation for the decline in protest filings at the GAO is that the enhanced post-award debriefing procedures implemented by the Department of Defense in response to Section 818 of the National Defense Authorization Act for FY 2018, have eliminated some of the need for information-fishing protests due to more fulsome explanations for agency award decisions. This explanation would also be consistent with the simultaneous rise in the effectiveness rate of protests. It could now be more likely that protesters are filing arguably meritorious protests.

What were the most prevalent reasons for sustaining protests?

The report states that the “most prevalent reasons” for sustaining protests during FY 2022 were: (1) unreasonable technical evaluation; (2) flawed selection decision; and (3) flawed solicitation.

As a point of comparison, the most prevalent reasons for sustaining protests during FY 2021 were: (1) unreasonable technical evaluation; (2) flawed discussions; (3) unreasonable cost or price evaluation; and (4) unequal treatment.