Ask anyone in the industry what the greatest pain point is for virtual assets, and they will say it is the absence or uncertainty of regulation.

On 1 November 2018, the Securities and Futures Commission (“SFC”) announced a roadmap with concrete measures for creating a virtual asset regulatory framework. This swiftly follows other major announcements over the last two weeks, including from the Financial Action Task Force (“FATF”), a taskforce of regulators from the United Kingdom (“Taskforce”) and the Fintech Association of Hong Kong (“Fintech Association”).

The new SFC framework paves the way for a far more robust virtual asset industry and will undoubtedly create an opportunity to create safe markets, including for the emerging class of “security tokens” and “STOs”.

This alert describes the material features of the new framework, plus a primer on a few other important points.

But first – what has not happened

Let’s start with what the SFC announcement is not, because we have already seen a number of incorrect press reports.

This may well change in future given the other international developments that we describe below. However, the current state of play is effectively only expanded.

So what has happened?

It has been an incredible fortnight for blockchain.

First, two important international announcements were made in late October.

A virtual asset is an intangible asset that is issued using distributed ledger technology (commonly referred to as “blockchain”). It typically entitles the virtual asset holder to a bundle of rights (and possibly liabilities) set out in smart contracts and other relevant documentation, such as an offering document or a whitepaper (or both).

The Virtual Asset Report places virtual assets into one of three categories: 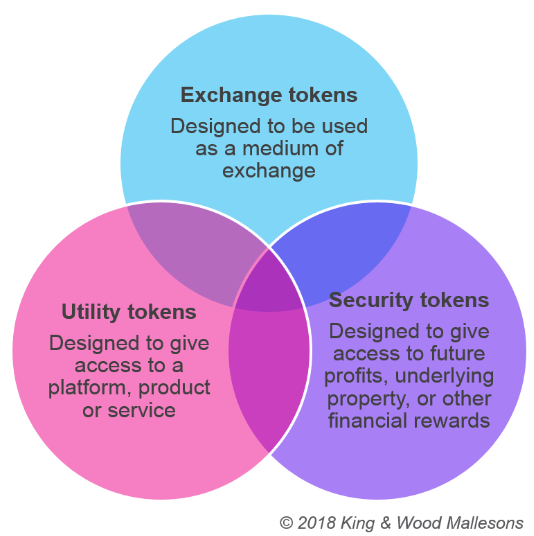 However, as our graphic illustrates, these three categories are by no means mutually exclusive – indeed, some virtual assets have characteristics of all three.

We also stress that these are conceptual categories only – they are not legal categories as such, making an analysis of each asset critical to understanding its regulatory status.

This means that the regulations that apply to a particular virtual asset can only be determined on a case-by-case basis. At present, this is because virtual assets are not specifically regulated in most jurisdictions (with the notable exception of Japan).

The lack of specific regulation does not mean that regulators have been ignoring the industry: here in Hong Kong we have seen the SFC intervene to help shut down a virtual asset sale.

Further, there are a wide variety of other laws, from data protection to consumer protection, that are directly relevant to the virtual asset industry.

But there is increasing recognition by regulators that the current financial services regimes are not coping with the sheer weight of retail and institutional interest in virtual assets - and the speed with which the industry moves.

The New Regulatory Approach is not new law per se. This would require a significant legislative process to expand the powers of the SFC beyond its current remit under the Securities and Futures Ordinance (Cap. 571), which does not extend to all virtual assets.

Rather, the New Regulatory Approach clarifies the application of some existing rules to virtual assets portfolios, and opens the door to virtual asset exchanges entering the SFC’s regulatory sandbox.

The New Regulatory Approach is set out in two key documents:

The Statement is further accompanied by two appendices:

The Statement sets out the New Regulatory Approach generally and highlights some of the risks surrounding virtual assets. The other three documents, however, are more targeted. We describe each below.

The Circular and the Regulatory Standards

These two documents make the key point that even if a particular virtual asset is not a “security” or “futures contract” under the Securities and Futures Ordinance (Cap. 571 of the Laws of Hong Kong) (“SFO”), managing or dealing in these “non-SF virtual assets” can still amount to a regulated activity.

We summarise the key impacts as follows: 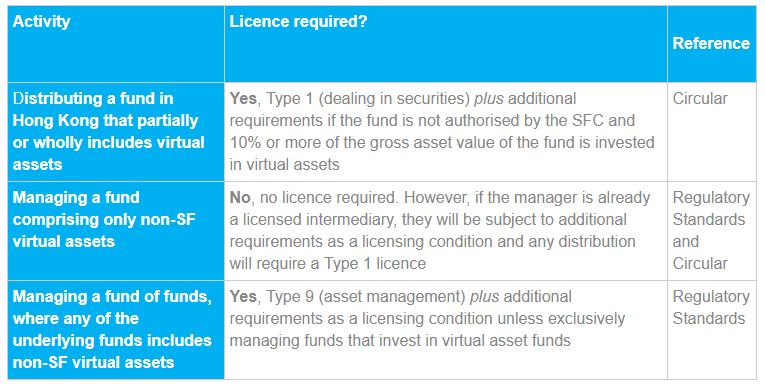 The Regulatory Standards also make it clear that the SFC expects to be kept fully informed by licensed intermediaries regarding their current or planned virtual asset management activities – and that a failure to do so may result in regulatory action. As always, we recommend early engagement to head off these issues.

This document sets out the circumstances in which a virtual asset exchange – which the SFC calls a “virtual asset trading platform operator” (“Platform Operator”) – could potentially:

The catch is that it will be up to the Platform Operator to bring themselves within the SFC’s jurisdiction by offering for trading at least one virtual asset that constitutes a “security” under the SFO. As the SFC phrases it:

"This is an opt-in approach designed to set those Platform Operators who are committed to adhering to the SFC’s high standards apart from those who are unwilling or unable to meet the conduct standards set by the SFC." 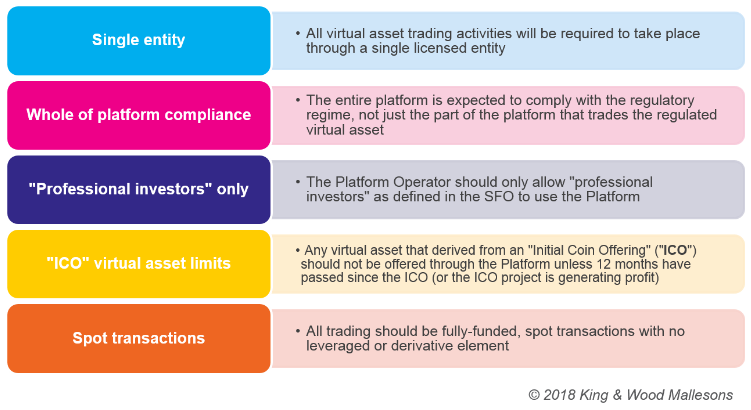 These core principles will be in addition to terms and conditions that the SFC is currently developing, that will cover a broad spectrum of additional compliance topics:

C. The road ahead

Clearly, it has been a busy few weeks for the regulators. What these developments show is the increasing recognition that virtual assets will, eventually, be integrated into the global financial system. With this will come the legitimacy that some in the virtual asset industry have long craved. But it will also bring with it the full range (and weight) of financial services regulation.

Heading into 2019 we should start to see the first responses to consultations processes flagged in the Virtual Asset Report. Here in Hong Kong, we will begin to see the New Regulatory Approach in action - with a few Platform Operators in the SFC’s sandbox, and a few licensed intermediaries managing virtual asset portfolios under SFC supervision.

And the ripple effect from FATF’s virtual asset announcement will continue. We expect to see other major financial centres make moves toward regulation, by either expanding their current regime or, as Hong Kong has done, bringing virtual assets within the existing regulatory remit.

Accordingly, the regulatory landscape for virtual assets will look very different this time next year. What is most clear, however, is that any notion of virtual assets being “jurisdiction-less” or the “Wild West” is long gone.

While regulation continues to expand, best practices and industry collaboration will continue to play a very important role in shaping this nascent market.

On that note, we have been delighted to be involved in creating the Fintech Association Best Practices for Token Sales and ASIFMA’s Best Practices for Digital Asset Exchanges, as well as participating in initiatives by Global Digital Finance.

These cover important areas such as:

Opportunities for the industry

Regulation is a good thing. It strengthens market confidence by creating an appropriate baseline standard and levels of supervision commensurate with consumer expectations. This is not 2007 and the dawn of blockchain anymore, where virtual assets were limited to a reasonably small community of risk-tolerant participants.

Significant institutional growth and market expansion, particularly with the development of more credible custodial solutions and trading facilities (but also widespread abuse and risk in certain segments), require a regulatory response. That response must strike a balance in nurturing innovation, but also protecting the general public.

We believe that the key opportunities that the SFC announcement will bring are as follows: