Weeding Out the Results-How Did Cannabis Fare in the Election?
Blog The Blunt Truth

Welcome to a special post-Election Day edition of The Blunt Truth. Marijuana was on the ballot last night, and just like the other races, the final result was a mixed decision.

Four states were deciding whether to allow recreational or medical marijuana. Three of them voted yes.

*Note: There were three constitutional amendments on the Missouri ballot concerning medical marijuana legalization. The other two proposals, which would also have legalized medical marijuana, but with a 2% or 15% tax, failed. This is probably for the best, as now the state doesn’t have to sort out conflicting laws.

**Regular readers will recall that the Utah governor, Gary Herbert, had already called for a special legislative session to create a medical marijuana policy, regardless of the outcome on Election Day. So it’s a bit of an anti-climax, but still noteworthy.

Michigan’s vote makes it the first state in the Midwest to legalize recreational cannabis. One wonders if neighboring states Illinois and Wisconsin might follow their lead? J.B. Pritzker, Illinois’s governor-elect is on the record as favoring adult-use, so look for action there.

As for Wisconsin, the governor-elect, Tony Evers, supports medical marijuana and wants the voters to decide on recreational use. This represents a change from Scott Walker’s view of cannabis as a gateway drug, so we could have a Midwestern repeat of the New Jersey situation. 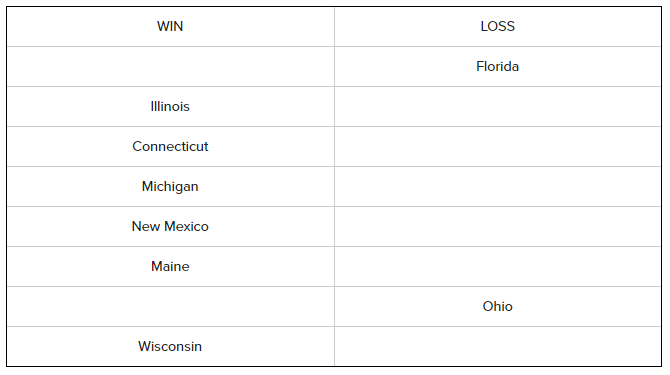 And in the U.S. House of Representatives, Dana Rohrabacher (R-Ca.) looks likely to lose his seat. Co-author of the Rohrabacher-Farr (now Rohrabacher-Blumenauer) amendment that prevents the Justice Department from spending funds to interfere with the implementation of state medical marijuana laws, Rohrabacher is a well-known name in cannabis circles. One assumes another Representative will take his place when this legislation is up for renewal in future.More wins than losses, although not a total victory.

So what does this mean for legalized marijuana? Nothing is certain in politics, but looking into our crystal ball, we see more states going “green,” either with full legalization or by legalizing for medical use. What didn’t happen last night is as important as what did. North Dakota aside, we didn’t see a repudiation of legalization, and even there, the language of the measure (with no possession limits and no regulatory structure) may have had something to do with its defeat.

If legal marijuana is a snowball rolling downhill, it may take a while to reach the bottom, but no new obstacles to its eventual arrival appeared in this election.