After two years of negotiations, Australia and Hong Kong signed two agreements on 26 March 2019: the Australia-Hong Kong Free Trade Agreement (AHFTA), and a new Investment Agreement (IA), replacing an initial one signed in 1993, which was the basis of the claims made in the unsuccessful challenge of Australia’s plain packaging laws in 2012-2015. Both jurisdictions have been active in FTA negotiations. This is the fourth trade deal signed by the Hong Kong government in 18 months, and Australia now has FTAs with 7 of its top 8 export markets (an FTA with the eighth, the EU, is currently undergoing negotiation). The AHFTA and IA will now need to be ratified domestically, whereby processes have already begun in both countries.

Australia is currently Hong Kong’s 7th-largest services trading partner, with trade in services between the two countries amounting to US$6.5 billion in 2017. The AHFTA explicitly covers increasingly important issues to the two jurisdictions, and it marks a step forward for services. The agreement addresses trade in goods, trade facilitation, technical barriers to trade, sanitary and phytosanitary measures, trade in services (including professional services and education cooperation), financial services, telecommunications, movement of natural persons, e-commerce, data localization, government procurement, IP, competition policy and other topics. It also covers Australia’s rail and transport industries, potentially opening these industries up for Hong Kong businesses. Until now these industries have been covered by only one FTA, that between Australia and New Zealand. 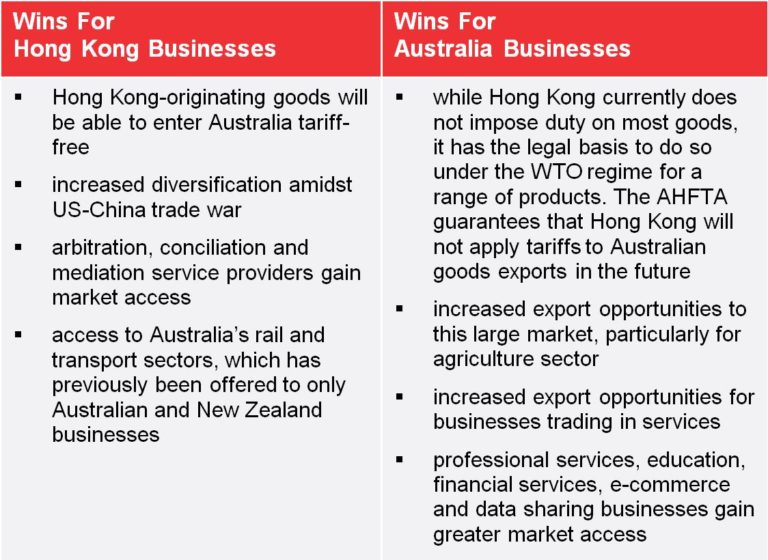