“Get off of my cloud”: Paris court rules in favor of Rolling Stones logo owner in infringement case

In May 2019, French customs notified M. BV that they had seized 1000 badges similar to its European registered trademarks (see below) on the basis of Article L. 716-8 of the French Code of Intellectual Property. The defendant had imported these badges imitating the Rolling Stones logo, with the flag of Britanny as lipstick (see below). 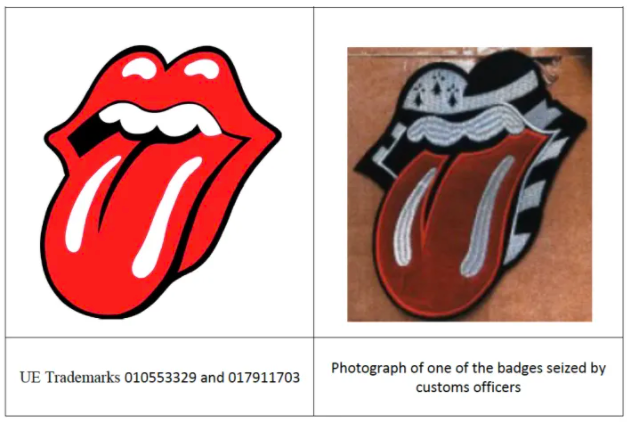 M. BV holds the intellectual property rights related to the Rolling Stones logo, including the rights to the trademarks mentioned above. M. BV claimed that these trademarks should benefit from the status of well-known marks (Article 9-2 c) of Regulation 2017/1001 of June 14, 2017: eur-lex.europa.eu). Accordingly, M. BV had to demonstrate such a reputation: by its history and its geographical extent, by investments via commercial and advertising documents, by press articles or by surveys, market research, and website consultation statistics. In this case, M. BV provided several press clippings and recalled in particular that the Rolling Stones logo was created in 1971, that it has accompanied musicians since then, that the original work was acquired in 2008 by the Victoria and Albert Museum and that it is extensively used during the Rolling Stones concerts, but also via various partnerships, including with Zara or Ligue 1 teams, namely Olympique de Marseille and Paris Saint-Germain. Hence the conclusion of the court: “the trademarks in question, which are known to a significant part of the public concerned for the goods and services covered by them, in particular in classes 25 (clothing) and 41 (entertainment), enjoy an important reputation in the European Union“.

M. BV is also presumed to own the copyright associated with the artwork, its author, Mr. John Pasche, having assigned the rights to M. BV in 1976. In this regard, M. BV provided a contract dating from 1982 presented as rearranging the 1976 contract, which was not disclosed to the court. In any case, the court recalls that “a legal person can be presumed to be the copyright holder if it markets the work under its name unequivocally, and in the absence of any claim from the author“. In the present case, proof of such commercial exploitation has been provided, from which it follows that M. BV must be presumed to be the copyright holder. Now, what about the originality of the artwork? The defendant brandished the argument that the author had found inspiration in the red lips of the goddess Kali. The source of inspiration is not disputed. Nevertheless, not enough to assert that the artwork of John Pasche is only a “banal takeover of a common fund that cannot be appropriated“. Admittedly, the frivolous argument had no chance of succeeding. Furthermore, the Paris court of first instance concluded:

“M. BV explains that the logo designed by John PASCHE, if it is indeed inspired by oriental images, nevertheless associates elements emanating from a psychedelic universe and translates a message inviting to an upheaval of morals, translating John Pasche’s own vision, so that the claimed logo reproduced on the “Rolling Stones Classic Tongue Patch” bears Mr. Pasche’s personality and is original”.

Therefore, M. BV was duly authorized to file a request with the customs, carry out a seizure of goods alleged to be counterfeit, and start infringement proceedings before the Paris court of first instance.

Regarding trademark infringement, the court considered that the badges in question could be distinguished from the registered trademarks only by the affixing of the flag of Britanny (or “Gwen Ha Du”), in lieu of the red lips, which was not enough to rule out “the risk of confusion in the mind of the average consumer, who will be led to believe that there is a partnership between the parties (…), [the] public who will be led to consider that M. BV intended to promote musical events linked to rock concerts in Brittany“. Referring to the Sabel BV v. Puma AG, Rudolf Dassler Sport case, the court recalled that “the more distinctive its character, the greater the risk of confusion” (CJEU, 11 November 1997, Sabel BV v. Puma AG, Rudolf Dassler Sport, C-251/95, para. 6). Finally, the court added that it did not matter that the trademarks “were misused for humorous purposes as long as the likelihood of confusion is identified“.

Regarding copyright infringement, the court also ruled out the parody exception on the basis of Article L. 122-5-4° of the French Code of Intellectual Property and the Deckmyn v. Vandersteen case (CJEU, 3 September 2014, Deckmyn v. Vandersteen, C-201/13: curia.europa.eu), which defines the guidelines to follow in the event of a conflict between copyright and freedom of expression. In this case, the Paris court of first instance adopted the following reasoning:

“The disputed badges imported by the defendant do not contain any text and, by themselves, appear devoid of any parodic, caricatural or humorous effect that the original work would not already have, this effect not being able to derive from the only printing of the flag of Britanny on the lips of the logo”.

In the absence of additional information on the negative economic consequences of the infringement and on the profits made by the infringer, the court was only able to estimate the moral damage suffered by the M. BV. In this regard, the court considered that this damage would be rightly and fully compensated by the sums of 10,000 and 5,000 euros, respectively, for trademark infringement and copyright infringement.