Economic parasitism: the fraudulent application for a trademark to attract competitor’s consumers on Amazon

On February 28, 2020, the Lille court (France) rendered a judgment (Legalis.net), the facts of which, as well as the compensation ordered, deserve great attention. Here are the quick facts: 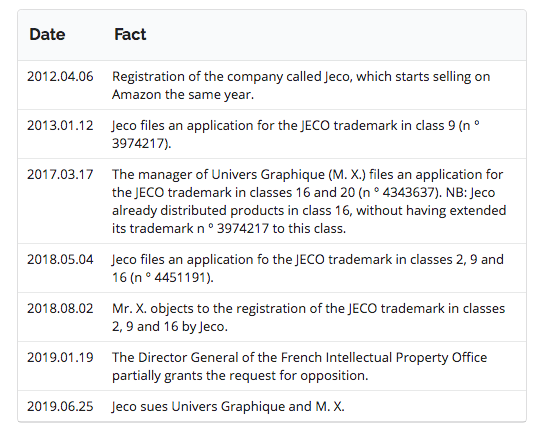 The fraudulent application for the trademark

Under French law, requests regarding fraudulent trademarks are based on two grounds: Article L. 712-6 of the French Intellectual Property Code and Fraus omnia corrumpit.

If a trademark registration has been requested either by fraud of a third party’s right or in violation of a legal or conventional obligation, the third-party who considers that he/she/it has a right on the fraudulently registered trademark may claim the property of the said trademark in court (…)

The second legal basis, Fraus omnia corrumpit, is a general principle of law that injects a certain level of moralization in the business world. The implementation of this principle prevents the author of the fraud from benefiting the said fraud. Referring to this principle, the Lille court stated:

A trademark application must be considered fraudulent when the trademark right is not constituted and used to distinguish products or services by identifying their origin but is diverted from its function with the sole intention of harming the interests of a third party, intentionally depriving the latter of a sign that this third-party is using or about to use.

The action based on Article L. 712-6 requires the claimant to justify the intention of the registrant.

In order to demonstrate the intention to harm, and thus the fraudulent intention, Jeco proved that Mr. X and Univers Graphic were aware of the Jeco company (and, therefore, of its corporate name), of the JECO trademark registered in 2013 (in class 9), its domain name jeco-distribution.com and its presence on Amazon. The Jeco company also proved that Mr. X. and Univers Graphique had used the JECO trademark to sell competing products on multiple Internet platforms (including Amazon). Finally, the claimant also demonstrated that Univers Graphique had not made any use of the expression “Jeco” prior to 2017. Given the circumstances, the opposition proceedings started by Mr. X. were audacious. Hence the conclusion of the court:

Mr. X had deliberately applied for the “JECO” trademark, not to distinguish his products by identifying their origin, but in order to confiscate for his profit a sign necessary for the business of Jeco Distribution, thus characterizing a diversion of the function of the trademark with a harmful intention to Jeco Distribution.

The transfer of the trademark was inevitable.

According to the claimant, the respondents had committed acts of unfair competition and economic parasitism by using the disputed trademark to optimize their visibility on Amazon. Under French law, a parasitic at is the fact, for an economic operator, to put himself in the wake of another, unduly taking advantage of the latter’s reputation or investment. Applying this principle, the Lille court concluded:

Applying for a trademark used by a competitor, unprotected for the products concerned by this litigation, in order to gain the visibility created by this competitor on an e-commerce platform, so as to take advantage of its financial and intellectual investments, without spending a penny, to sell similar or identical products, constitutes unfair competition and economic parasitism.

Such acts should have given rise to compensation. In the present case, given that the plaintiff had not justified its claim for 30,000 euros, the court exercised its discretion and established the compensation at 9,000 euros. In the absence of any document, it is impossible to assume that such compensation is correct. However, it would have been possible to order the defendants to disclose the profits made by using the JECO trademark over the period concerned, which includes, for example, sales made on Amazon.

Finally, as an additional civil remedy, it would be wise to consider the possibility of ordering the partial or total publication of the judicial decision on the Amazon page of the defeated party so that it is brought to the attention of consumers. In that case, the anonymity of the natural person concerned should be respected.