To understand the legal framework being used to control and prevent the spread of COVID-19 in Australia, it is first necessary to understand Australia’s federal system of government.

Australia operates under a federal system of government created by the Commonwealth Constitution.

The States have much broader powers to make laws than the Commonwealth, having the power to make laws on any matter relating to the State, subject to any inconsistency with Commonwealth laws.

The Territory governments have the powers of self-government granted to them by the Commonwealth.

Local councils have the powers granted to them under State and Territory legislation.

Under the division of powers that operates under Australia’s federal system of government, the power to make laws relating to the protection and promotion of public health is primarily a power of the States and Territories.

Each State and Territory has public health legislation which contains provisions which relate to managing risks to public health, such as the risks posed by communicable diseases like COVID-19. These laws are set out in the table below: 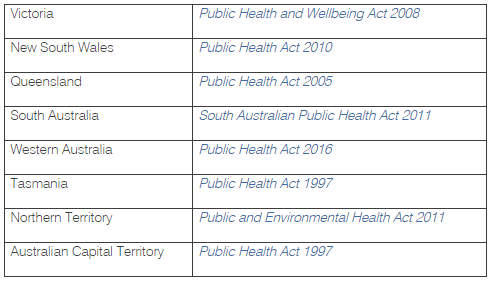 The State and Territory public health Acts are administered and enforced by powers granted to Ministers, government departments and local councils. The Acts set out the powers and functions of the State and Territory Chief Health/Medical Officers as well as the powers of officers authorised to administer and enforce the legislation. These officers are employed by State/Territory health departments and as environmental health officers working in local councils.

Authorised officers and environmental health officers carry out functions under the public health legislation such as contact tracing and enforcing compliance with the laws.

State and Territory police can assist in the enforcement of the public health and emergency management laws when called upon to assist.

The Commonwealth Government has enacted the Biosecurity Act 2015, which contains powers in relation to:

Communicable diseases such as COVID-19 pose biosecurity risks, meaning the powers in the Biosecurity Act 2015 are capable of being exercised by Commonwealth Government officials in response to the COVID-19 pandemic, if necessary.

The response to the COVID-19 pandemic in Australia is a national issue, but because public health legislation is primarily a power of the States and Territories, powers in the respective State and Territory public health Acts are primarily being exercised to respond to the pandemic.

The national cabinet is not a formal arrangement under Australia’s legal and constitutional framework, but is a practical measure that has been put in place to manage the response to the pandemic.

Outcomes determined from the national cabinet are being used to guide decisions that are then made at the State/Territory level in relation to the exercise of powers available under the State and Territory public health Acts. These decisions include the exercise of emergency powers in the public health Acts that allow the imposition of the restrictions that are being put in place to control and prevent the spread of the virus.

By way of example to illustrate how the public health powers are being exercised at the State level, in Victoria, on 16 March 2020, the Minister for Health, Jenny Mikakos MP exercised her power in the Public Health and Wellbeing Act 2008 to declare a state of emergency in Victoria in relation to the COVID-19 pandemic. The effect of the state of emergency being declared is that it allows emergency powers in the Public Health and Wellbeing Act 2008 to be exercised by authorised officers. These emergency powers include the mandatory directions that have been made which have forced the closure of premises and the implementation of the numerous social distancing measures that have been determined at the national cabinet level.

Whilst the current approach of the national cabinet is to generally have consistent measures implemented across Australia, a potential benefit of the public health legislation operating at an individual State/Territory level is that if necessary, different measures can be imposed in different States/Territories. For example, if one State/Territory becomes more severely affected by the pandemic, that State/Territory can, in the exercise of their legislation, impose restrictions that relate only to that particular State/Territory.

At the Commonwealth Government level, on 18 March 2020, in the exercise of a power in the Biosecurity Act 2015, the Governor-General, acting on the advice of the Commonwealth Health Minister, Greg Hunt MP declared that a human biosecurity emergency exists in Australia in relation to COVID-19. In accordance with the Act, the human biosecurity emergency declaration is in force for a period of three months, but the Act allows the declaration to be extended for further periods of three months, if necessary.

The human biosecurity emergency declaration gives the Commonwealth Health Minister the power to determine any requirement that is necessary or to give any direction to any person to:

In the exercise of these powers, the Commonwealth Health Minister has, to date:

Further requirements or directions may be made by the Health Minister, if required.

The emergency powers that are being exercised across Australia are having significant economic impacts and by their nature have impacts on the liberty of individuals. These impacts are being weighed up against the very serious risks to public health from inaction in accordance with guiding principles in the legislation such as the proportionality principle, which requires decisions made to be proportionate to the level of risk to public health.

All State and Territory public health Acts and the Commonwealth Biosecurity Act 2015 have criminal offence provisions in respect of people who fail to comply with requirements imposed on them by the laws. The enforcement powers in each Act vary, but enforcement powers are generally granted to authorised officers, environmental health officers and in some instances police officers can be called in to assist. The enactment of emergency management powers in State/Territory legislation can see a greater role played by police in enforcing restrictions.

Marcus Heath is a Special Counsel in our Government, Planning and Environment team, and is a sessional lecturer in Public and Environmental Health Law at Swinburne University of Technology.

For more information on Governmental power at all levels in regards to the coronavirus, please contact Marcus Heath, or our Government team and Public and Administrative Law teams.

It is vital you stay informed in regards to the COVID-19 pandemic. Russell Kennedy is publishing a variety of timely Alerts and Insights; please subscribe to our mailing lists here.