As I have pointed out previously, the Board struggles to issue precedential decisions. This is because the Board (now approaching 300 judges) must reach a “sufficient majority” consensus on an issue before designating it precedential. As a practical matter, this outdated process excludes all but the most straight forward questions of law from receiving enough “yes” votes to be designated precedential.

To be sure, such disparity in opinion across a large number of judges is not surprising on close questions of law. Reasonable minds differ. Which is why it is somewhat surprising that 98% of PTAB merit-based decisions are unanimous.

To get some kind of benchmark for where the PTAB would be expected to be on unanimity (as unscientific as it may be), I compared the number of divided PTAB panels to that of the CAFC since 2012. The total number of decisions by both is comparable (PTAB 1800; CAFC 1900), as is the number of judges involved in each panel (3). Of course, the CAFC is an appeals court and the PTAB a trial court. However given the additional fact finding role of the PTAB, if anything, one would expect the PTAB to have more divided opinions than the CAFC. Not so. 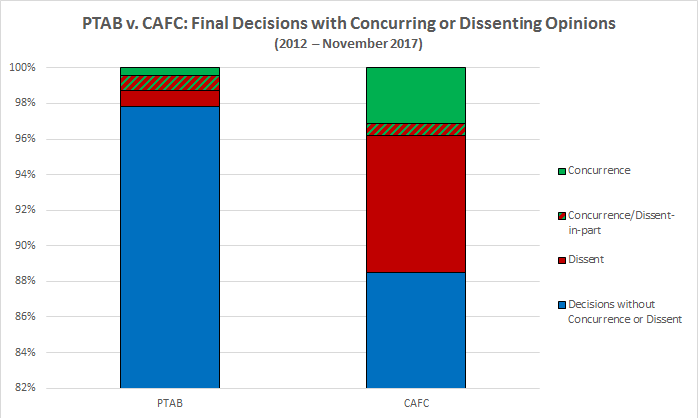 As can be seen the PTAB issues unanimous decisions 98% of the time (DIs & FWDs). The CAFC, a court that also uses 3-judge panels but that must additionally defer to the fact finding of lower courts, stands at roughly 88%.

Again, while the CAFC differs in more than a few respects in terms of case types, complexity and role, the PTAB would still seem to be out of calibration with logical expectations. This could be due to any number of factors.

First, it may be that some recent expanded panels have undermined judicial independence.

For example, to arrive at consistency on issue joinder — a question of law once unsettled across AIA Trial panels — the Board essentially “hacked” the precedent process by expanding rehearing panels. That is, by expanding panels with judges aligned to one side of this disputed question of law, the Board ensured consistency in outcome. Basically, a de facto precedent was created

While expanded panel practice may be effective in establishing consistency, this administrative expedient has come at a great cost to agency credibility. Despite the Board’s best intentions, and the fact that it has never been done to address a merits based decision, the optics of “panel stacking” has been rocket fuel for PTAB critics. Some PTAB judges now holding the minority view on issue joinder have written concurring opinions to explain their opposition to issue joinder, pointing out that they felt compelled to concur given the “Director’s view.” While precedent would force the same result, the perception that external forces are at work may have a chilling effect on alternate opinions.

Second, judges may not be receiving the necessary incentives to author concurring/dissenting opinions. Or perhaps judges are dissuaded by colleagues, peer review structures, or just internal culture from writing such opinions. Certainly such opinions should not be written for statistics sake. But it seems quite likely that more than a few judges are biting their proverbial tongue with a 98% unanimity stat. This feedback would be of great value to stakeholders, and would comport with the expectations for fair and balanced judicial bodies.

The PTAB has become the busiest patent court in the U.S. To stay that way, 2018 needs to be the year of refinements to the AIA trial process. Once the Oil States debate is finally put to bed, the legislative efforts will ramp up. The Board has done an admirable job in silencing critics on the topic of follow-on petitions and serial attacks, but the work must continue.