The Law Commission's report on reforming the SAR regime - Guidance over change?

In 2018, the Law Commission launched its consultation on the reform of the suspicious activity report (SAR) regime created by Part 7 of the Proceeds of Crime Act 2002 (POCA), the so-called "SARs regime". The stated aim of the SARs regime is to improve the prevention, detection and prosecution of money laundering and terrorist financing in the UK. It has, however, been recognised for some time that the SARs regime is not fit for purpose and that reforms are necessary in order to ensure that it is effective.

According to figures in the Law Commission's consultation, the number of SARs submitted annually has grown steadily, with the UK Financial Intelligence Unit (UKFIU) receiving 463,938 SARs between April 2017 and March 2018, 22,691 of which were authorised disclosures requiring a decision on consent. This places a significant burden on the UKFIU and law enforcement bodies to review and react to the intelligence received. Other common criticisms of the current SARs regime include the quality of the intelligence received from SARs and the burden it places on individuals and firms operating in the regulated sector.

In June 2019 the Law Commission published the results of the consultation, which considered responses received from various stakeholders, including the members of the regulated sector, supervisory authorities, government departments, law enforcement and prosecuting authorities.

Despite the apparent need for comprehensive reform, the Law Commission's recommendations are limited in nature with an emphasis on further guidance rather than a root and branch overhaul of the SARs regime.

An emphasis on further guidance

A key recommendation in the report is the introduction of an Advisory Board, made up of representatives from the reporting sector, law enforcement, government and members providing specific expertise. The remit of the Advisory Board would be to assist with producing statutory guidance and to consult on monitoring the effectiveness of the regime. The Law Commission noted that a nominated officer operating in the regulated sector may have up to nine different sources of law and guidance on the operation of the SARs regime. In order to ensure that guidance available is consistent and comprehensive, the Law Commission proposed the introduction of statutory guidance issued by the Secretary of State. Reporters would also be assisted by the introduction of a prescribed form for submission of SARs, with the aim of developing forms tailored to individual reporting sectors. The purpose of such a prescribed form would be to give reporters greater guidance on the information that should be included in a report.

Few proposed changes to the regime 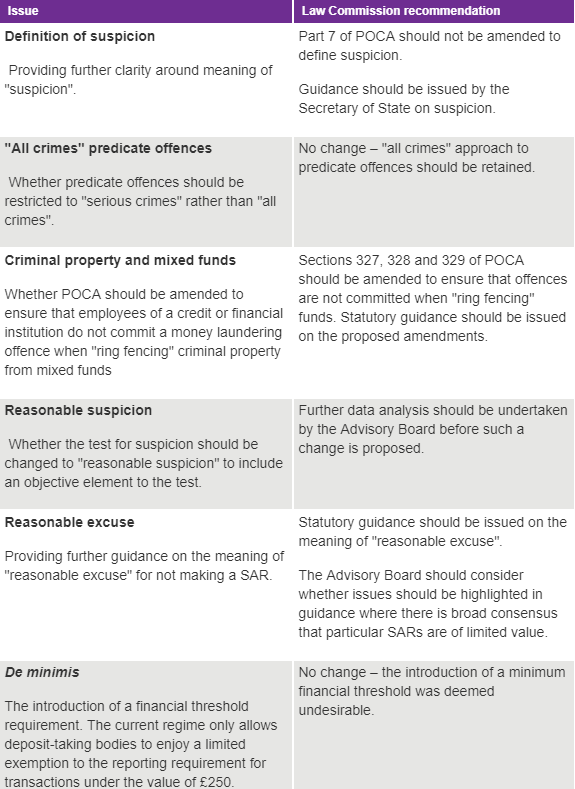 Since the introduction of POCA there have been various proposals to amend the SARs regime. Although the Law Commission envisages future changes to the regime, those in the regulated sector might be forgiven for thinking that most of the key issues have not been dealt with and little has been done to address the real concerns expressed about the operation of the regime.