Highlights of the CCPC Annual Report for 2016

The Competition and Consumer Protection Commission (the “CCPC”) has published its Annual Report for 2016, its second such report since it was established in October 2014. The clear emphasis of the 2016 Annual Report is on enforcement activity, with the CCPC highlighting cartel investigations as an ongoing key priority area, and stepping up calls for greater civil fining powers for competition enforcement. In addition to calling out its investigations in the motor insurance, retail, public transport procurement and private rental sectors, and its substantial merger caseload, the CCPC also identifies the impact of Brexit as a fundamental challenge. 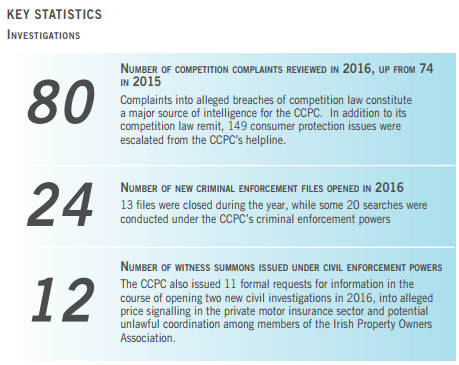 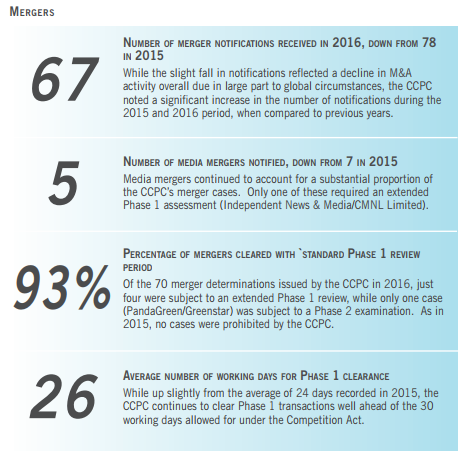 WHAT WERE THE KEY INVESTIGATIONS IN 2016?

The main focus of the CCPC's criminal enforcement activities was bid rigging, while it also continued its activities in the motor industry, particularly against alleged "car-clocking". The CCPC's criminal enforcement activities in 2016 included an investigation into potential bid rigging in the flooring sector (which ultimately resulted in a successful prosecution in 2017 in the Aston Carpets case) and alleged collusion between suppliers of publiclyfunded transport services in the Munster and Leinster regions.

As regards civil enforcement, the CCPC opened two investigations during the course of 2016, into alleged price signalling in the private motor insurance sector and alleged coordination between members of the Irish Property Owners Association with respect to the implementation of charges as an alternative to the Government's rent cap legislation. The latter case was closed in early 2017, when the IPOA entered into undertakings with the CCPC to retract a statement of intention to co-ordinate on a range of measures, including the introduction of new charges to tenants.

The CCPC's closed two further investigations during the course of 2016 by accepting binding commitments from the parties involved: (i) in the Relay case, a software services provider and five motor insurers entered into undertakings with the CCPC in relation to the sharing of commercially sensitive information; and (ii) in the Tour Guides case, the Approved Tour Guides of Ireland were directed by the CCPC to remove minimum recommended rates from their website. These cases show the CCPC's continuing willingness to use commitments as a practical means of resolving investigations.

The Annual Report refers only briefly to the ongoing investigation into alleged anti-competitive practices in the bagged cement sector, although it continues to be listed as a key priority for the CCPC. The Annual Report notes the judgment of the High Court preventing the CCPC from reviewing certain documents seized and that the CCPC's appeal to the Supreme Court appeal was awaiting hearing as at the end of 2016. There is no mention of the Supreme Court decision dismissing the CCPC's appeal, which was handed down in May 2017.

The merger of Paddy Power and Betfair, creating one of the world's largest betting and gaming companies, was cleared by the CCPC in 2016 following an extended Phase 1 investigation. The CCPC found that there was horizontal overlap between the parties' activities with respect to the provision of online betting and online gaming services in the State and also a potential vertical relationship between the parties, as Betfair currently sells live betting exchange data to online betting service providers. Following an extended phase one review which included carrying out a consumer survey, the CCPC concluded that the parties were not close competitors and the markets would remain competitive with a range of other players.

The proposed acquisition by PandaGreen Limited of Greenstar was cleared by the CCPC following the only Phase 2 investigation conducted in 2016. The combination of two of the State's largest waste collection companies was cleared subject to PandaGreen giving a binding commitment to divest certain domestic waste collection businesses located in Dublin to a third party (Greyhound Waste). During the market investigation, the CCPC conducted extensive market inquiries and consulted with several state bodies and local authorities, including local authorities in the general Dublin area, the Environmental Protection Agency and the National Waste Collection Permits Officer.

This was the first media merger to be referred to the Broadcasting Authority of Ireland ("BAI") for a full examination under the media merger regime in Part 3A of the Competition Act. Following an extended Phase 1 investigation, the CCPC approved INM's proposal to acquire several local and regional newspapers as part of an acquisition of CMNL on competition grounds. However, the Minister for Communications, Climate Action and the Environment referred the merger for a Phase 2 examination by the BAI on media plurality grounds. The examination was not completed as the transaction was terminated by mutual consent of the parties.

WHAT ARE THE CCPC'S PRIORITIES?

The Annual Report emphasises that a "key priority for 2017 is to take enforcement action against firms engaging in information sharing and anti-competitive agreements." Bid rigging, particularly in public procurement, will continue to be a major enforcement priority for the CCPC, a fact borne out by the CCPC's ongoing emphasis on enforcement (including the successful prosecution in the Aston Carpets case) during the course of 2017.

Brexit will be a fundamental challenge

The 2016 Annual Report identifies the impact of Britain's exit from the European Union as a fundamental challenge for Ireland's markets and the CCPC in particular. The Annual Report notes that while the focus in Ireland has been on exports, the CCPC is also concerned about the impact of Brexit on imports, in particular, the potential for both tariff and non-tariff barriers to raise prices and reduce choice for consumers. It is notable, that the CCPC is increasing its resourcing and staffing levels and, as of January 2017, the CCPC had 89 staff with a further 15 vacancies to fill.

Finally, the Annual Report calls for the CCPC to be empowered to impose administrative or civil fines for breaches of law. It emphasises that there are "undoubtedly cases where we would have sought fines if that option were available", and that it would "welcome any opportunity to broaden ... [its] enforcement tools". This call is particularly timely, in light of the European Commission's moves in 2017 to introduce a more effective enforcement toolkit for national competition agencies.