The Financial Conduct Authority (“FCA“) has published proposals to ban the sale of derivatives or exchange traded notes (“ETNs“) which reference certain types of cryptoassets (“crypto-derivatives“), to address harm posed to retail consumers. The scope of the ban would extend to the sale, marketing and distribution of all derivatives (ie. options, futures and contracts for difference (“CFDs“)) and ETNs which reference ‘unregulated transferable cryptoassets’ by FCA-regulated firms acting in, or from the, UK to retail consumers (ie. ‘retail clients’ as defined in COBS 3.4). The ban would be implemented through proposed changes to the conduct of business (“COBS“) sourcebook.

Context of the proposed ban:

Distributed ledger technology (“DLT“), which underpins cryptoassets, and cryptoassets themselves, have faced increased regulatory scrutiny over the past year both in the UK and abroad, and the FCA recognises that there is growing risk of harm to consumers.

In October 2018, the Cryptoassets Taskforce (the “Taskforce“) published its final report (the “CATF Report“) outlining the UK’s policy and regulatory approach to cryptoassets and DLT. This consultation paper is a response to the FCA’s commitment in the CAFT Report to consult on a potential ban on the sale to retail consumers of derivatives referencing certain types of cryptoassets (for example, exchange tokens), including CFDs, options, futures and transferable securities.

Globally, the European Securities and Markets Authority (“ESMA“) and the European Banking Authority (“EBA“) as well as International Organisation of Securities Commissions (“IOSCO“) have all taken action in the cryptoasset space. With this level of international recognition, it is no surprise that we are seeing the FCA acting to increase protection in relation to cryptoasset products.

In the UK, CFDs are the main derivative product which reference cryptoassets. Between August and October 2018, there were approximately £3.4bn in retail client trading volume, representing 0.7% of total retail CFD trading. Futures on cryptoassets are rare in the UK and the FCA has not found any options.

The FCA considers that crypto-derivatives (and ETNs referencing unregulated transferable cryptoassets) are not suitable for retail consumers in particular, due to:

Based on its cost-benefit analysis, the FCA estimates that a ban on crypto-derivatives could reduce losses for retail consumers by between £75m and £234.3m.

Scope of the proposed ban: 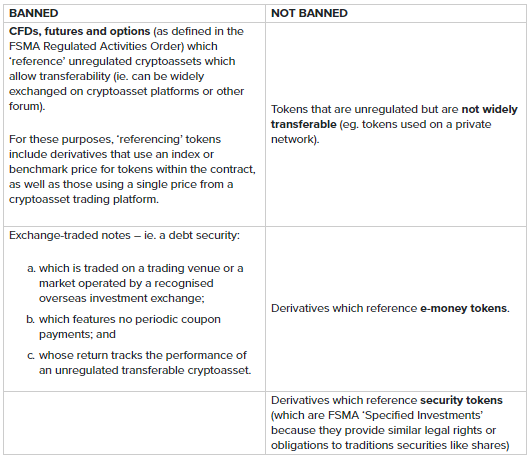 Unintended consequences of the proposed ban:

The FCA recognises that the proposals may have some unintended consequences, such as encouraging some retail consumers to ‘invest’ directly in unregulated tokens which are inappropriate forms of investments. The FCA will continue to engage with retail consumers and warn them of the potential risks of such investments.

The FCA also notes that some firms could try to circumvent the ban by, for example, offering derivatives and ETNs referencing other tokens, or encouraging retail clients to ‘opt up’ their client categorisation to profession client or move their accounts to affiliated non-UK entities. The FCA intends to continue to monitor these risks and remind firms of their existing obligations in relation to, for example, product governance and client categorisation rules. Where firms are attempting to circumvent the ban in these ways we would expect the FCA to take supervisory and, where necessary, enforcement action.

Given the volatile, unpredictable nature of cryptoassets and the risks to retail consumers in investing in derivatives and ETNs referencing them, it is not surprising that the FCA has proposed steps to restrict access to these products for the most vulnerable consumers. Firms who offer these products to retail consumers should consider the proposed rules and whether they wish to respond to the consultation paper by the deadline of 3 October 2019. The FCA’s policy statement and final handbook rules are expected in early 2020.