The UK's departure from the EU brought an end to the application of EU State Aid rules in the UK.1 On 30 June 2021, the Government published a draft Bill and Explanatory Notes on the UK's new domestic subsidy control regime.

Despite the Government's assurances that the CMA will have a key role, its powers are quite limited and there will be no ability for businesses to challenge awards before a regulator, with the government relying on private enforcement to bridge the gap. In the past, private enforcement has not been an effective way of testing or challenging the lawfulness of subsidies. It remains to be seen whether the Bill will do enough to address this.

WHAT DOES THE BILL COVER?

The definition of 'subsidy' is similar to 'State aid'4 and any form of public assistance that would have been considered 'State aid' prior to 31st December 2020, is likely to be considered as a 'subsidy' under the new domestic regime. A very important difference is the need to consider any potential impact on trade within the UK internal market.

Subsidies required for safeguarding national security and subsidies granted temporarily to address emergencies such as flooding and economic emergencies are excluded from the regime. Further exclusions apply to subsidies relating to national security, pursuit of the Bank of England's monetary policy and for large cross-border or international projects.

A key provision relates to 'streamlined subsidy schemes' to be made by the UK Government. Details are not available yet but these are intended to allow lower-risk subsidies to be given by public authorities more quickly and easily, without their needing to assess compliance with the subsidy control principles. Streamlined subsidies may turn out to be similar to the old 'block exemptions' which were a key method for subsidy providers and recipients to quickly selfassess compliance with the rules.

SOIs and SOPIs have yet to be defined but the latter category (expected to be small in number) must be referred by public authorities to the CMA Subsidy Advice Unit (see below) before they may be given.

UK subsidies and subsidy schemes6 must comply with seven Subsidy Control Principles, six of which derive from the TCA. Principle F is an additional domestic test aimed at protecting competition and investment in the UK. The Explanatory Notes describe the principles as follows: 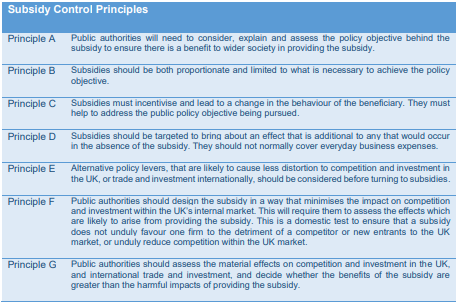 Subsidies which relate to energy and the environment must also adhere to the additional nine Energy and Environment Principles deriving from the TCA.

The Bill sets out rules and procedures for the rescue, restructuring and liquidation of ailing or insolvent enterprises (with specific rules for banks and insurance companies).

The CMA will set up a Subsidy Advice Unit to monitor and report on the regime and report on certain subsidies and schemes before and after they are given or made. The CMA's role is to write a report: the ultimate decision will be made by the awarding authority.

Subsidies/Schemes of Particular Interest must not be awarded before the end of a cooling-off period of 5 working days (extendable) following publication of the CMA's report. When requested by the CMA, the Secretary of State may extend the reporting period. Public authorities may also voluntarily refer certain other subsidies or schemes to the CMA before they are given or made. In either case, the CMA's report will include an evaluation of the public authority's assessment of the subsidy or scheme's compliance with the rules. The Secretary of State may also refer a subsidy or scheme to the CMA. Again, the ultimate decision will be made by the awarding authority (although it is thought that awards given in the face of CMA objections will be rare presumably because they would be very publicly inviting private enforcement action).

In order to ensure transparency, subsidies must be registered on a publicly available database and the Bill sets out the information to be included on the register. As under the old regime, only awarding bodies may register a subsidy. There will be exemptions such as those applying to SPEI assistance of less than 14.5m or for certain types of project including hospital care, social care and transport.

Judicial reviews on the award of subsidies will be heard by the Competition Appeals Tribunal (the CAT). Interested parties will be able to apply to the CAT to review a decision to give/make a subsidy/scheme. The CAT will apply the same principles when hearing an application for review as would be applied by the High Court on application for judicial review and will be able to grant the same types of relief as are available in such proceedings (mandatory orders, quashing orders, declarations and injunctions).7

In addition, the CAT will be able to make a recovery order if a subsidy control decision is found to have breached the subsidy control requirements. Public authorities will have a right to recover subsidies that are misused by a beneficiary of the subsidy (e.g. used for a different purpose than that for which they were given): this right will be enforceable as if it were a contractual right, making recovery easier for public authorities.

There is a lot to be welcomed in the Bill, although we should remember that the basic framework for this legislation was already set by the UK's commitments in the TCA. The introduction of a principles-based system, combined with CMA oversight, is sensible but further detail on some fundamental points and guidance on how the regime should work in practice is needed.

The transparency obligations are a key part of the enforcement mechanism of the Bill, as the intention appears to be to encourage private enforcement. The CMA will not have the power to prohibit a subsidy although authorities will have to pay heed to what it says in its reports. Only parties whose interests may be affected by a subsidy will be able to bring a challenge in the courts (the CAT) to have the authority's decision overturned. Their ability to do so will be underpinned by the obligations on authorities to publish information about subsidies and subsidy schemes on the transparency database, and to provide (pre-action) information to interested parties on request. It is unclear whether this approach will materially increase the (relatively low) number of private challenges from the numbers seen under the EU State aid rules.

The definitions of SOI and SOPI, which will be set out in future regulations, will be key, as they will determine which subsidies must, and which subsidies may voluntarily, be referred to the CMA. To avoid over-notification, the definitions need to be straightforward to apply. We would expect the SOPI category to include the largest subsidies but other criteria may also be used to catch subsidies likely to have the greatest impacts, for example subsidies to sensitive sectors, or to particular categories of recipient.

How authorities carry out (and document) any necessary balancing exercise between the subsidy control principles is also going to be important. It may involve complex and detailed assessments. Authorities are already expected to follow BEIS guidance8 on applying the TCA principles, where relevant to a subsidy. While the principles in the Bill largely derive from the TCA, their wording is not identical and the Bill sets a further (domestic) test in Principle F. A streamlined set of guidance covering purely domestic scenarios and those that engage the UK's obligations under international trade agreements is desirable, to help simplify the process. Awarding authorities should, in any event, record their assessment process, analysis and conclusions, in case their subsidy decision is challenged.

Principles F and G, insofar as they require authorities to take account of the impact of proposed subsidies on competition and investment within the UK, are aimed at protecting the UK internal market. These principles are reinforced by the prohibition on subsidies that are conditional on the business relocating all or part of its activities to another area of the UK. Taken together, the principles and the prohibition reflect a clear desire to avoid subsidy races that attract investment to one part of the UK at the expense of another. The most obvious concern is that the different nations of the UK may compete with one another for investment. But we do not yet have any detail on what is meant by an "area of the UK"; it has the potential to apply at a regional or more local level. Awarding authorities should tread carefully while the scope of the prohibition remains unclear.

The Bill throws the Northern Ireland Protocol (NIP) into sharper focus, as the Bill's requirements do not apply where the NIP does. Where the NIP applies, authorities must follow EU state aid rules and this may necessitate pre-notification to the European Commission. Authorities will want clarity on whether the NIP applies to a planned subsidy, if they are to avoid defaulting to a precautionary approach of following both regimes, with potentially inconsistent outcomes. In terms of UK-EU relations, any uncertainties or disputes over which rules apply may lead to frictions in the future.