CBInsights recently published its Q2 2019 Global Fintech Report. Although there were 838 deals worth $15.1 billion completed during the first half of 2019, this represents a significant decline from 2018 levels, both in number and deal value. 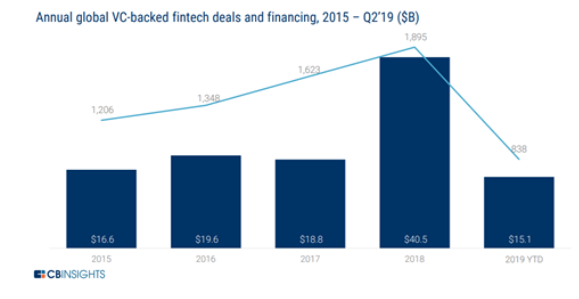 In Q2 2019, the number of VC-backed fintech deals fell to the lowest number since Q4 2016. However, mega-rounds, or rounds in which $100 million or more in proceeds were raised, served to boost the percentage of late-stage fintech deals completed during the first half of 2019. There were 25 mega-rounds completed, raising a total of $5 billion during Q2 2019. In the US, there were 14 mega-rounds completed in the second quarter of 2019, worth $3.3 billion, bringing funding to a new quarterly high of $5.1 billion. 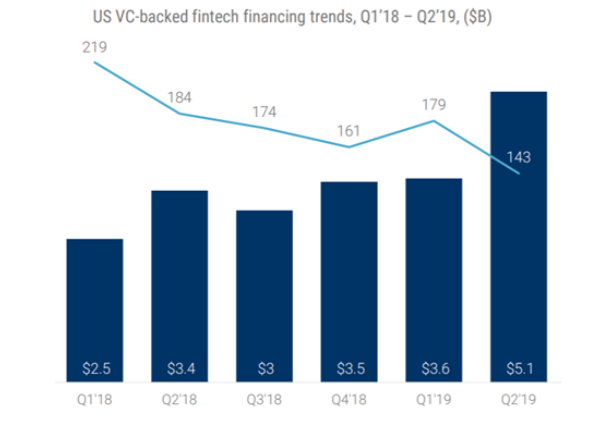 Globally, as of the date of the report, there are now 48 fintech unicorns with a total aggregate value of $187 billion, with 28 unicorns based in the United States. There were seven new fintech unicorn “births” in Q2 2019 and two in Q3 2019, including Markets, Bill.com, Carta, Lemonade, Checkout.com, Value, and Liquid in Q2 2019, and Hippo and Judo in Q3 2019. U.S. fintech VC-based equity funding in Q2 2019 amounted to $5.1 billion across 143 deals. Although the number of deals has declined from 2018, the funding level may top 2018 levels. During the first half of 2019, the largest deals included funding transactions for SoFi, Affirm, Lemonade and Carta.

Within the fintech sector, the report also covered various sub-sectors worth mentioning. Digital banking companies have raised over $2.5 billion in funding year-to-date. Since the emergence of these mobile and digital-based banking apps, these companies have amassed over 230 million user accounts. Capital markets-tech companies had a number of mega rounds, raising almost $2 billion in funding to date. Among these companies focused on providing services to financial institutions, we find startups poised to disrupt traditional IPOs, such as a new, seed-stage, SEC-approved stock exchange, and a capitalization table (or “cap table”) management startup, which has leveraged the trend of companies staying private longer to gain traction. Alternative and direct lending companies have raised $3.2 billion over 90 deals in the second half of 2019. Finally, insurance tech (or “insurtech”) companies raised almost $5 billion in funding over 108 deals in the first half of 2019.