“It’s only AI when you don’t know what it does, then it’s just software and data” remains a useful heuristic to get to grips with AI algorithms. In legal terms, AI is a combination of software and data. An algorithm is a set of rules to solve a problem. The implementation in code of the algorithm is the software that gives instructions to the computer’s processor. What distinguishes an AI algorithm from traditional software is first, that the algorithm’s rules and software implementation are themselves dynamic and change as the machine learns; and second, the very large datasets (‘big data’) that the AI algorithm processes. The data is (i) the input training, testing and operational datasets; (ii) that input data as processed by the computer; (iii) the output data from those processing operations; and (iv) insights and data derived from the output data.

This section of looks at IP rights in algorithms as software and inventions made by computer.

AI – a set of technologies

AI is a set of technologies not a single one and is best observed as a number of streams as shown in the Figure below. The main streams are machine learning, natural language processing, expert systems, vision, speech, planning and robotics. 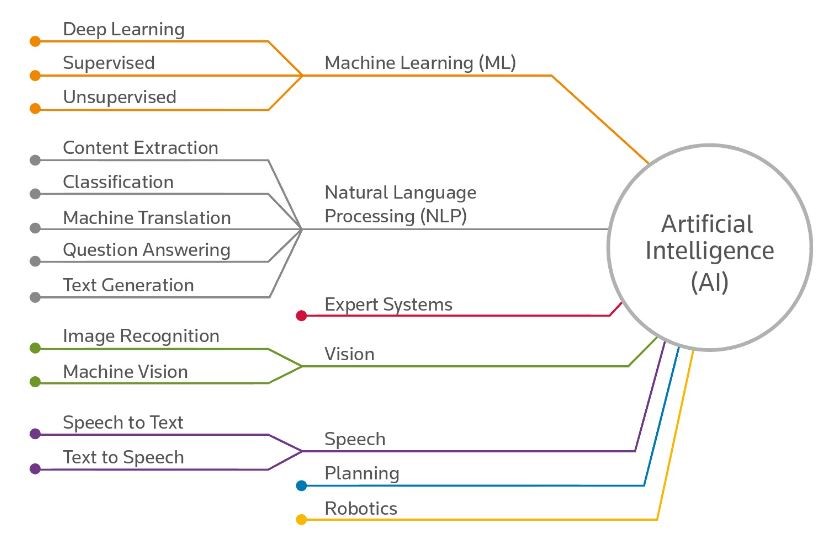 Machine learning is the technique by which computers learn by example or by being set goals and then teach themselves to recognise patterns from the examples or reach the goal without being explicitly programmed to do so. The three main subsets of machine learning are deep, supervised and unsupervised learning. Deep learning has emerged as AI’s ‘killer app’ enabler and uses large training datasets to teach the AI algo software to accurately recognise patterns from images, sounds and other input data. In supervised learning, the AI algorithm is programmed to recognise a sound or image pattern and is then exposed to large datasets of different sounds or images that have been labelled so the algorithm can learn to tell them apart. Labelling is time consuming, expensive and not easily transferable, so in unsupervised learning the data is unlabelled and the system is set a particular goal – to reach a high score in a game for example – and the algorithm is then exposed to large unlabelled datasets that it instructs the computer to process to find a way to reach the goal.

Machine learning techniques when combined with cameras and other sensors are accelerating machine perception – the ability of AI algorithms to recognise, analyse and respond to the data around them and ‘see’, ‘hear’, ‘listen’, ‘speak’ and ‘reason’. Natural language processing has emerged as a primary human user interface for AI. Enabled by accurate voice recognition, NLP algorithms respond to one-way user input requests and interact in two-way conversations. An Expert System emulates human decision-making skills by applying rules (from its ‘inference engine’) to the facts in the system (its ‘knowledge base’). Vision is currently the most prominent form of machine perception, with AI algorithms trained to recognise faces, objects and activity. Machine perception has developed quickly in speech, where the error rate now matches humans’.

Machine control is the design of robots and other automated machines using control mechanisms to enhance the speed and sensitivity of machine response in ‘sensing – planning -acting’. Machine control adds movement in and manipulation of an interactive environment to the combination of machine learning and machine perception in a static environment.

AI will provide a significant impulse to the development of intellectual property law, particularly as dynamic AI algorithms start to enable computers to generate new works (in terms of copyright) and invent and discover novel ways of doing things (in terms of patent law).

Who owns copyright works generated by AI algorithms without immediate or direct human intervention? Here the background is that s.9 of the UK Copyright Designs and Patents Act 1988[ii] (‘CDPA’) provides that that author of software (as a literary work) is the person who creates it (s.9(1) CDPA) and that the author is the work’s first owner (s.11) unless it was created by an employee in the course of his employment, when the employer is the first owner (s.11(1)). By s.9(3) CDPA:

“[i]n the case of a literary, dramatic, musical or artistic work which is computer-generated, the author shall be taken to be the person by whom the arrangements necessary for the creation of the work are undertaken”

where “computer-generated” is defined at s.178 CDPA as meaning “that the work is generated by computer in circumstances such that there is no human author of the work.”

These operative terms are fraught with difficulty in a practical sense. There has been no significant UK case law to date to clarify what is meant by “undertaking necessary arrangements” for the creation of the work where “there is no human author” so the growing ubiquity of AI algorithms is likely to lead to clarification of these terms through the courts. Parties to agreements for AI algorithm system development and use that could result in new copyright works should consider including any necessary express terms as to their ownership, assignment and licensing. Consideration should therefore be given to a range of questions including addressing and recording:

Database right is separate from copyright and applies only in the EU to confer on the maker of a database there the right to prevent unauthorised extraction or reutilisation of the database’s contents.[iii] A “database” is essentially a searchable, systematically arranged collection of independent works or data (s.3A(1) CDPA). The maker of the database is the first owner of database right (Reg. 15 CRDR) and the database “maker” is “the person who takes the initiative … and assumes the risk of investing” in its contents (Reg. 14(1) CRDR). Unlike copyright, the rules on ownership of database right do not envisage computer-generated databases, but the ownership position still raises a number of considerations. For example, it could mean that the maker of a database using data generated by sensors or other technology is the manufacturer of the sensor/technology rather than the entity deploying or using the sensor/technology for specific purposes.

Database right has proved to be a thorny issue for the EU particularly in the AI context. A Commission staff evaluation report of 25 April 2018 concluded that database right should be retained, although highlighting widely articulated issues around creating and obtaining data, especially in the era of IOT sensor and machine generated databases and the very large datasets processed by AI/ML software:

“… it is assumed that [database] right does not apply to databases that are the by-products of the main activity of an organisation. This means that [database] right does not apply broadly to the data economy (machine-generated data, IoT devices, big data, AI, etc.); it only covers databases that contain data obtained from external sources (for example industries like publishers, who seek out data in order to commercialise databases).” [iv]

AI algorithms and software are most likely to be confidential to and trade secrets of the developer, and secrecy provides another and increasingly important string to the bow of IP protection. These aspects are considered in greater detail in our White Paper and blog on AI datasets.

Use of algorithms may result in new inventions and the question arises whether computer implemented inventions are capable of patent protection. S.1(2)(c) Patents Act 1977 (‘PA’) excludes “a program for a computer” from patent protection to the extent that the patent application “relates to that thing as such”.[v] This has led to a line of cases in the UK since 2006 which has sought to establish and clarify a test for determining the contribution that the invention makes to the technical field of knowledge (potentially patentable) beyond the computer program “as such” (not patentable).[vi] If the invention is potentially patentable on this basis, s.7(3) PA provides that:

and s.7(2)(a) PA provides that a patent for invention may be granted “primarily to the inventor or joint inventors”. US law is more specific in defining (at 35 USC §100(f) and (g)) “inventor” as “the individual or, if a joint invention, the individuals collectively who invented the subject matter of the invention”. The context of s.7(3) PA means that the “actual deviser of the invention” should be a “person” and there is no regime similar to that for copyright for computer-generated works.

Again, the takeaway from the patent law perspective is also that it is worth considering expressly covering in AI contracts the ownership, assignment and licensing aspects of AI-generated inventions and patent rights as well as copyright works.

“Where the stated inventor is an ‘AI Inventor’, the Formalities Examiner request a replacement F7. An ‘AI Inventor’ is not acceptable as this does not identify ‘a person’ which is required by law. The consequence of failing to supply this is that the application is taken to be withdrawn under s.13(2).”[vii]

In a decision on 4 December 2019 (Thaler/DABUS), the applicant, Mr Thaler, filed statements of inventorship stating that the inventor was “an AI machine called ‘DABUS’” and that the applicant acquired the right to grant the patents in question by “ownership of the creativity machine DABUS”. The Hearing Officer concluded:

“I have found that DABUS is not a person as envisaged by sections 7 and 13 of the Act and so cannot be considered an inventor. However, even if I am wrong on this point, the applicant is still not entitled to apply for a patent simply by virtue of ownership of DABUS, because a satisfactory derivation of right has not been provided. The applications shall be taken to be withdrawn ….”[viii]

“In both applications a machine called “DABUS”, which is described as “a type of connectionist artificial intelligence”, is named as the inventor. The applicant stated that he had acquired the right to the European patent from the inventor by being its successor in title, arguing that as the machine’s owner, he was assigned any intellectual property rights created by this machine.

In its decisions, the EPO considered that the interpretation of the legal framework of the European patent system leads to the conclusion that the inventor designated in a European patent must be a natural person. The Office further noted that the understanding of the term inventor as referring to a natural person appears to be an internationally applicable standard, and that various national courts have issued decisions to this effect.

Moreover, the designation of an inventor is mandatory as it bears a series of legal consequences, notably to ensure that the designated inventor is the legitimate one and that he or she can benefit from rights linked to this status. To exercise these rights, the inventor must have a legal personality that AI systems or machines do not enjoy.

Finally, giving a name to a machine is not sufficient to satisfy the requirements of the EPC mentioned above.”[x]

The patent law position, both in the UK and more generally, therefore currently provides greater clarity than the copyright and database rights

To view all formatting for this article (eg, tables, footnotes), please access the original here.
Kemp IT Law - Richard Kemp
﻿
Back Forward