We review and provide commentary on ASIC’s public M&A related activities over the first half of 2019 and the future areas of ASIC’s regulatory focus, as described in the corporate finance report published by ASIC in September.

ASIC has released its biannual report summarising its corporate regulatory activity over the first half of 2019.1 This report contains key statistics and observations from ASIC’s regulatory oversight of transactions over the period, insights into areas of focus, and plans for policy updates.2

We provide some of the public M&A highlights below.

Some notable observations from the period include: 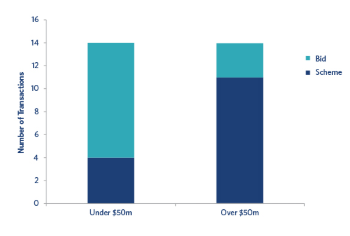 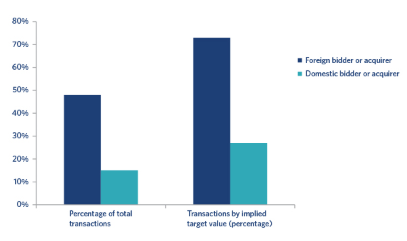 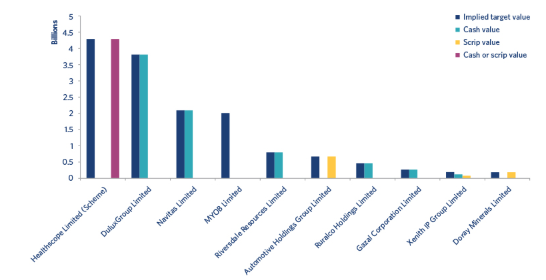 Insights from ASIC’s activity and future areas of focus

The corporate finance report notes that over the period ASIC scrutinised control transactions that were undertaken via a scheme of arrangement, with a focus on ensuring fairness and equality in these transactions. Certain case studies where ASIC has intervened in this regard are summarised below.

In the Healthscope Limited scheme of arrangement, ASIC intervened to oppose the convening of the scheme on the basis that an interested party and its affiliates (the Group) should form a separate class and that a separate meeting of each class should be convened. In this matter, ASIC also refused to provide a no-objection letter for the scheme.

The Group acquired a strategic stake in Healthscope through the use of a forward derivative contract, with the intention of pursuing the acquisition of certain Healthscope assets via a scheme of arrangement. Brookfield Business Partners and its institutional partners (the scheme acquirer, Brookfield) and Healthscope subsequently entered into various interrelated agreements to sell assets to the Group in connection with the proposed scheme. The Group agreed to procure that the holders of shares underlying the forward derivative contract voted in favour of the scheme.

ASIC argued that the magnitude and nature of the arrangements positioned the Group similarly to a joint proponent of the deal — justifying a separate class under the traditional test. Healthscope resisted ASIC’s argument. However, consistent with usual practices in similar situations, Healthscope undertook to tag the votes of the Group so that the Court could consider the effect of any voting by the Group on the passing of the resolution to approve the Scheme, including whether those votes should be discounted. Given the votes demonstrated overwhelming support of the Scheme shareholders, the Court ultimately approved the scheme.

We have previously discussed this transaction as part of our Australian M&A podcast series.

ASIC’s view on this issue is that when a director will receive a contingent benefit in connection with a scheme:

We have written further on this topic here.

Disclosures outside the scheme booklet

In Netcomm Wireless Limited (No 2) [2019] FCA 1109, NetComm announced just a week before the scheme meeting that two proxy advisers had recommended that shareholders vote in favour of the scheme. ASIC was concerned that this announcement invited holders to simply rely on the conclusion of the proxy adviser’s reports without the supporting information in the full report. This announcement was retracted after ASIC’s inquiries into this matter.

ASIC has also noted that it generally considers that a declaration by an acquirer that an offer will not be increased should be sent to target holders via a supplementary dispatch — even if made relatively soon after dispatch of the scheme booklet.3

ASIC has also emphasised its focus on not only the impact of disclosures, offer structuring, and conduct on target holders, but also on the active market in which transactions are taking place. The corporate finance report included two case studies, which related to:

The corporate finance report also notes that ASIC is currently working on a number of M&A updates, which include:

ASIC has also reminded market participants that contraventions of the Corporations Act in relation to a control transaction can result in criminal prosecution and imprisonment. It provided recent examples of two matters prosecuted by the Commonwealth Director of Public Prosecutions, in relation to: