A reminder of the Definitive Guideline

On 1 February 2016, the guidelines for the sentencing of health and safety offences, corporate manslaughter and food safety and food hygiene offences (“the Definitive Guideline”) came into force.

For the purposes of this article, we will be considering the impact of the Definitive Guideline in relation to health and safety at work offences.

The basic structure of the Definitive Guideline is tariffbased. It uses, a detailed nine-step approach intended to increase consistency and transparency. Courts are given a starting point for assessment based on the size of the organisation and the, the overall seriousness of an offence. The overall seriousness of the offence is determined by the level of culpability and the level of harm that has resulted as well as the likelihood of that harm occurring. Fines in health and safety cases are now  directly linked to the risk of harm rather than the actual harm caused.

Impact of the Definitive Guideline

The Sentencing Council has reviewed prosecutions data provided by the Health and Safety Executive (‘HSE’) looking at a 10-month ‘pre guideline’ period and a 10 months ‘post guideline’ period in relation to fines awarded. Information from Companies House was also reviewed which enabled the Sentencing Council to analyse the value of the fine in relation to the size of the organisation. The table below sets out the percentage increase in the level of fines pre the guideline and post the guideline. 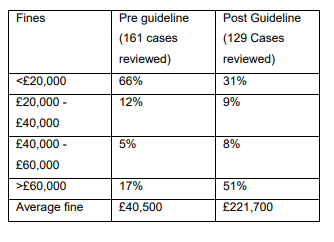 It is clear that the fine amounts have increased after the Definitive Guideline came into force for organisations of all sizes. However, the largest impact was felt by the Large/Very Large organisations. The data shows that for large/very large companies the median fines rose from £25,000 to £370,800.

Since the implementation of the 2016 guidelines, the amount of individuals sentenced for health and safety offences has increased with 200 adult offenders being sentenced in 2017; it is also evident that the Definitive Guideline has resulted in an increase in the fine amount imposed on individuals. This change was not anticipated when the Definitive Guideline came into force but the data shows that the average fine has increased from around £6,300 to £8,200 with the increase in the proportion of individuals receiving a fine of £6,000 or more increasing to 50% from 30%.

Review of Case Law in Appealing cases under the Definitive Guideline

Whilst the fines have increased and the Courts appear to be rigorously following the Guideline, a review of recent case law suggests that the Court of Appeal has reduced fines imposed by lower courts under the Definitive Guideline for a variety of reasons. We give a summary of some of the key Court of Appeal decisions below:

Southwark Crown Court fined NPS London Ltd (‘NPS’) £370,000 for a breach of section 3 of the Health and Safety at Work Act for failures relating to an asbestos survey, identification and removal. The Judge at first instance assessed culpability with reference to the guideline as 'high', and assessed that the risk of harm created was harm category.

NPS’ accounts showed an annual turnover of £5-6 million. NPS therefore fell into the category of a small company for the purposes of the definitive guideline. NPS was owned by a parent company NPS Property Constantans Ltd whose annual turnover is £125 million. The Judge decided that the correct categorisation of the company should therefore be large organisation. Consequently, NPS were fined £370,000, which took account of its good health and safety record.

NPS subsequently appealed arguing that the Judge should not have taken into account the size of the parent company and that the small organisations table should have been used to assess the fine. The Court of Appeal agreed and confirmed that for the purpose of the Definitive Guideline the relevant turnover was that of the offending organisation. The fine was reduced to £50,000.

Squibb Group Ltd (‘Squibb’) was engaged as a demolition sub-contractor on a refurbishment project at a school in London. On the 24 July 2012, one of Squibb’s employees discovered a large clump of asbestos on site. Work on the project ceased immediately. A new asbestos survey subsequently demonstrated that there was widespread asbestos throughout the site, including parts of the building, which had been demolished in April 2012 by Squibb’s employees. This resulted in a fine of £400,000.

The Court of Appeal reduced the fine on appeal however, agreeing with the judge's assessment of 'high' culpability, but disagreeing with his assessment in relation to harm following the use of expert evidence to determine the level of ‘harm’ under the Definitive Guidelines. The expert determined that the likelihood of harm arising from the offence was low.

Squibb, was unsuccessful in overturning its conviction for breach of duty towards its employees under section 2 HSWA, but ultimately successful in reducing its fine from £400,000 to £190,000.

On 3 April 2017 Faltec was sentenced in respect of three offences under ss.2, ss.3 and 33(1)(a) of the Health and Safety at Work Act 1974 to a total fine of £1.6 million. It was made clear again in this case that expert evidence is key to assessing risk of harm arising. In this case, the expert evidence was that there was up to a 4 in 10,000 risk of fatality.

The findings of the Report suggest that the Definitive Guideline has resulted in a substantial increase in fine amounts for larger organisations, which was expected. However, fines have also increased, to a lesser degree, for smaller organisations with a knock on effect on the way in which fines are assessed against individuals as well.

It is important that organisations and their directors take the appropriate steps to comply with Health and Safety Legislation and operate their companies and projects with Health and Safety at the forefront, as any breaches are likely to result in a large fine that will have a significant effect, as is the intention, on the business.

However, the cases that have been appealed do show that the Courts interpretation of the Guideline is still evolving and that it is important to provide the Courts with sufficient information to assist in the appropriate fine being awarded, in particular, the use of expert evidence in relation to the assessment of harm does appear to be key.