Brief background to the dispute

Sky sued SkyKick for infringement in the UK High Court for use of the word SKYKICK and SKYKICK logos in relation to a cloud migration service. Sky relied on four EU TMS and one UK TM covering the following goods and services (the “Selected Goods and Services”):

Due to the timing of when Sky’s marks were filed, the applicable legislation is Regulation No 40/94 concerning the EU TMs and First Directive 89/104 concerning Sky’s national TM in the proceedings. However, had the current legislation been applicable the decision would not have been affected.

A summary of the five questions that Arnold LJ referred to the CJEU in the main judgement ([2018] EWHC 155 (Ch)) can be found here: https://www.aathornton.com/sky-v-skykick-a-closer-analysis/.

The Selected Goods and Services are those on which Sky have focused their infringement claim, although Sky had not at the time of the decision withdrawn the claim of infringement for the remaining goods and services. The court gave Sky seven days in which to withdraw that part of the infringement claim.

Lack of clarity and precision

Following the CJEU answer, the Court quickly and easily dispensed with the question as to whether Sky’s registrations were invalid on the basis of lack of clarity and precision of the specifications, unsurprisingly finding that they were not.

The next point to determine was the extent of invalidity of Sky’s marks on the basis of bad faith. Following the CJEU answer, bad faith in respect of part of Sky’s marks does not render the entire mark invalid on that basis.

SkyKick had not alleged at trial that “telecommunications services” or “electronic mail services” had been applied for in bad faith. SkyKick was refused permission to amend its case to include these services in its bad faith challenge, given how late in the day it was to raise a further serious allegation of bad faith. As this does not impact the decision on infringement the court dealt more briefly with the extent of validity of the remaining Selected Goods and Services. The findings of the court will however be of more practical interest to trade mark proprietors.

Given these findings, the Court held that Sky had applied for the trade marks with the intention to obtain an exclusive right for purposes other than those falling within the functions of a trade mark.

Further, the CJEU had held in its judgement that a provision in national law such as that under s32(3) UK Trade Marks Act (1994), that requires a declaration that an applicant is using or has a bona fide intent to use the mark in connection with the goods and services being applied for, is not incompatible with the directive. Such a provision cannot however constitute a separate ground for invalidity. The Court decided that Sky’s partially false declaration under s32(3) in its application for the UK TM relied on in the proceedings was “plainly inconsistent with honest practices in industrial and commercial matters”. Thus, this added to the evidence that the UK TM had been applied for in bad faith.

Take Away thoughts on Bad Faith

SkyKick’s last minute request to plead further bad faith allegations is a reminder that such an allegation is a serious one and cannot be introduced at the final step. Parties should think carefully about the basis for pleading bad faith and be given adequate opportunity to respond.

While the s32(3) UK TMA cannot, according to CJEU’s answer, act as its own ground for invalidity of a mark, this in the UK court’s view added weight to the notion that Sky had not acted in accordance with honest practices. However, the court did not have trouble in finding that Sky’s EU TMs to have been applied for in bad faith, despite there being no provision equivalent to s32(3) applicable to those marks. Therefore, it is questionable how much s32(3) might actually add to an argument of bad faith.

One could believe that, where a mark is found to be partially applied for without an intention to obtain that right for purposes that fall within the function of a mark, surely that is likely to be sufficient to also consider the actions of the applicant to be inconsistent with honest practices?

The decision did not unfortunately go into any more detail on the possible motivation for Sky to cover whips and bleaching preparations in its marks, but the inclusion of those goods is perhaps an indicator of more blatant dishonesty on filing in this case. There could be less blatant situations where the fact the applicant knowingly made a false declaration under s32(3) when filing a UK TM does make the difference between a finding of bad and good faith.

What is a “fair” specification?

The court then had to decide what would be a fair specification for Sky’s TMs that were found to have been applied for partially in bad faith.

The principles adopted by the Court in reducing the Selected Goods and Services can be summarised as:

SkyKick had proposed a fair wording of the Selected Goods and Services for Sky’s marks, but based on the fourth of the above principles, the Court rejected SkyKick’s proposal on the basis it was too tied to the specific findings of the Court in the main judgement as to what Sky had actually used its marks on (see paragraphs 24 to 67 of the main judgement).

Sky had not taken the opportunity to make its own proposal as to how the Selected Goods and Services should be narrowed.

The table below sets out a) the Selected Goods and Services found to have been applied for in bad faith b) SkyKick’s proposal (to the extent it was made available in the decision) and c) the “fair” specification devised by the court having regard to the goods and services Sky had been found to have used the marks for: 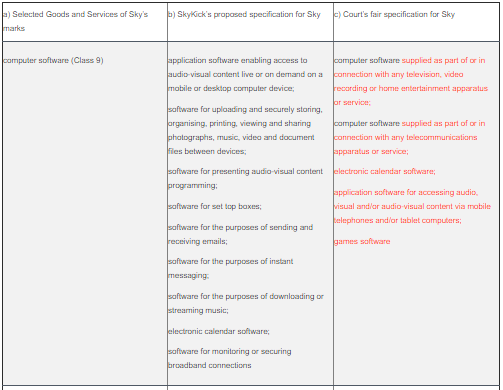 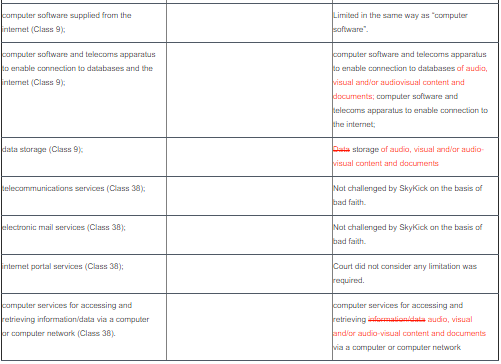 Take-away thoughts on the reduction of the specification

The court’s approach to this reduction of the Selected Goods and Services indicates some motivation not to overly restrict the rights of trade mark proprietors. The court noted that the first two parts of its devised specification for Sky could be considered imprecise, but that was necessary in order to give Sky a fair level of protection. It is acceptable to build into a specification a margin around what the mark will actually be used on, but this margin is small and does not extend to other subcategories of goods or services.

It will also be of comfort to trade mark proprietors to know that a single term cannot be written off as invalid just because it designates a broad category e.g. computer software, where some use within that broad category has been shown. However, it is important to remember that the fair specification is considered acceptable for Sky because the court had reviewed the scope of Sky’s business, using the evidence it had submitted. What constitutes a “fair” specification will be based on each trade mark proprietor’s commercial circumstances.

Trade mark applicants in future might try to discourage third parties from challenges on the basis of bad faith by avoiding such sweeping broad categories and providing some context in specifications. Being able to rely on a specification drafted by or for an applicant will be preferable to relying on one that has been subject to court scrutiny, at significant expense and effort for the applicant.

The advantage of keeping to subcategories in specifications is that clearance of marks for goods such as computer software using a register based search could in time become more viable to carry out than it currently is.

Although the finding of infringement of electronic mail services had decided the dispute, the court considered the interpretation of telecommunications services, no conclusion on which had been reached by the court in the main judgement.

The Court reviewed the case law on interpreting specifications. Referring firstly to the recent decision in Alliance Pharmaceuticals Ltd v European Union Intellectual Property Office , that held that where two possible literal interpretations of a specification exist, but one would lead to an absurd result for the extent of protection of the mark, the correct interpretation is the most plausible and predictable.

However, as had been held in the decision of 6 April 2017 in the NANA FINK case, where both possible literal interpretations of a specification are both equally plausible and predictable, a trade mark proprietor should not gain from not having ensured clarity and precision in the specification. In this scenario, the narrower interpretation is correct.

Finally, where a term in a specification makes no sense and the goods or services designated cannot be interpreted, such a term should be disregarded (Case T-571/11).

The court distilled the findings of these decisions into four principles (paragraph 56 in the judgement): In summary, therefore, the applicable principles of interpretation are as follows:

The second of these principles was found by the court to apply to the interpretation of telecommunications services. Since SkyKick did not appear to be arguing that the term was uninterpretable there was no reason to disregard it, as per the fourth principle. Despite holding that the term had a degree of imprecision, this did not in the court’s view mean its interpretation should be narrow as per the third principle. Therefore, the interpretation of it should be confined to the core of its possible meanings as “services consisting of or relating to telecommunication per se”.

Still, as the dispute had been decided on the identity of SkyKick’s service and electronic mail services, these findings did not add to Sky’s claim of infringement. Neither did the remaining Selected Goods and Services, none of which the court held were identical to the SkyKick service.

Take-away thoughts on interpretation of the specification

Interpretation of the specification is becoming more central to trade mark disputes, The decision collates the various principles that are being developed regarding correct approaches to interpreting specifications.

Given that the CJEU decision gave the court limited options as to the circumstances in which a specification can be held to be invalid, the finding of infringement is hardly surprising.

The court’s analysis of the issues that goes beyond what was necessary to decide the dispute will be of some practical assistance to trade mark attorneys in drafting and interpreting specifications. The CJEU judgement made clear the task of ensuring clarity and precision in specifications was for trade mark offices during the application stage.

Whether or not the case has consequences in how trade mark offices examine specifications will remain to be seen. Over the years we have seen a distinct shift in the UK and EU trade marks offices making the application process as simple and as accessible as possible for applicants, particularly those without legal representation. Whilst this does have clear benefits in equalising access to protection for Applicants, it does make it unlikely that the trade marks offices will now be inclined to bring in further examination or scrutiny of the commercial justification of Applicants when applying for very broad terms such as ‘computer software’ or ‘telecommunications’. Closer enquiries at the application stage into the commercial justification for protecting broad terms would involve closer, and likely lengthier, examination and may not be that practically possible, or perhaps even desirable.

In any case, post-Brexit the UK courts and trade mark office will have more scope to refine their own approach to these issues, and there are some hints throughout this case they will want to do so to some extent.