On Monday 12 February 2018, the Royal Commission held its much anticipated first public hearing in Melbourne. At this session, Commissioner Hayne and Senior Counsel Assisting the Commission, Rowena Orr QC provided background information to the inquiry and the timetable for the rest of the year. No applications for leave to appear were determined or evidence from witnesses taken at this hearing.

Below we provide you with an overview of events.

Responding to the Commission's requests for information

On 15 December 2017, Commissioner Hayne wrote to a number of industry participants (including banks, insurers and superannuation companies), regulators (ASIC, APRA and ACCC) and peak bodies (including Consumer Action Law Centre, Choice, the Financial Ombudsman Service, and the Credit and Investments Ombudsman), inviting them to submit information to the Commission which addressed a number of areas identified in the Terms of Reference. These responses were required by 29 January 2018. Some further letters were sent to industry participants, regulators and consumer bodies in January.

The Commissioner reported that 48 responses were received from different entities and these have now been received and examined. On 2 February 2018 some respondents were asked to provide more specific information about misconduct identified by the entity in the last 5 years, and the Commissioner also requested additional information to that which was provided in their original response, including requests to specify the nature, extent and effect of the conduct in respect of the examples they provided. During the hearing, Commission Hayne reminded us that "misconduct is defined in the terms of reference as including conduct that is an offence against commonwealth, state or territory law, conduct that's misleading or deceptive, contact that is a breach of trust, breach of duty, or unconscionable conduct, and conduct that breaches a professional standard or a recognised and widely-accepted benchmark for conduct."

These requests for additional information were due by 13 February 2018 with some entities requesting additional time to gather this information.

Last week, the big four banks received a third request for information from the Commission, specifically about consumer credit products. Commissioner Hayne has also written to the banks notifying them of the expectation that they will make relevant executives, with knowledge of these products, available to the Royal Commission when the public hearings begin in March.

In January, the Commission released an online form on its website for the public to make submissions about misconduct and conduct falling short of community expectations. At the time of the hearing, the Commission had received 385 online submissions, with the breakdown of responses as follows: 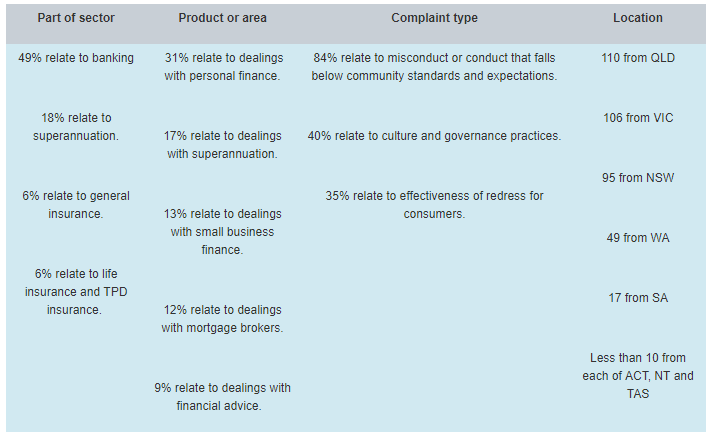 The Commission deliberately invited industry submissions ahead of public submissions, as undertaking this sequence of events will assist the Commission to identify gaps between what consumers perceive to be the problems in the financial services industry and what the industry perceives to be the key issues. Commissioner Hayne acknowledged that there will not be enough time to consider every submission and publicly examine all cases of alleged misconduct. Instead, they will focus on reviewing the information by reference to case studies which will form the basis of the public hearings. In examining the case studies, the Commission will consider:

The first hearing, scheduled for March 2018, will focus on home loans, car loans and other credit products, and whether consumers are enjoying the right to honest, fair treatment in their dealings with providers. The second hearing will focus on financial planning and wealth management, during which the Commission proposes to evaluate the success of the FoFA reforms.

Rowena Orr, QC, stressed that the public hearings will be but one way in which the Commission will conduct its work. The hearings will be supplemented by other means of information gathering and analysis, including analysing a large number of reports from recent inquiries and reviews that are relevant to this Commission. So far, more than 70 inquiries and reviews from parliamentary committees, regulators, independent reviewers and expert panels have been identified as relevant.

Solicitors and counsel assisting the Commission have also begun consultations with a number of stakeholders including financial services entities, regulators, members of the public and organisations directly engaged with Australians who have experienced conduct that has caused them hardship.

During the hearing, Commissioner Hayne stated that "a confidentiality or non-disparagement clause in an agreement will not act as a reasonable excuse against production in answer to a notice to produce or a summons. It would not be a reasonable excuse not to answer a question in a hearing".

The Commission has published Practice Guidelines concerning the conduct of the Royal Commission.

The Commission has also commenced producing and commissioning research and expert papers, and anticipate to release a series of papers throughout the year. Some of these papers may be reflected in the Commission's final report. Here is a link to the first two research papers.

The next public hearing will be on held on Tuesday 13 March 2018 - Friday 23 March 2018 in Melbourne. The first round of hearings will focus on consumer lending practices within the context of credit products such as home loans, car loans and credit cards.

An interim report is due by 30 September 2018, with a final report and recommendations due by 1 February 2019.